Greetings, the Center has had a busy start to 2021. We are bringing in new graduate students working on exciting new research projects. We have completed a timber harvest to release natural regeneration in a few of our longleaf pine stands and also to facilitate the next phase of our slash pine conversion restoration project. We are in the midst of using new education and outreach approaches to navigate the ever-changing world of communication during and after COVID. We’re all happy to see the approach of spring and to smell a little wood smoke in the air. We hope you enjoy catching up on some the activities at the Center this winter.

Isolated wetlands are common in some regions of the U.S., including the agricultural area of southwestern Georgia. They are called ‘isolated’ because they do not have visible surface channels to streams, rivers, or lakes. Lack of an obvious connection has caused them to be overlooked in considerations of water management and environmental health. Recent scientific evidence suggests that they are important sources of water storage and can protect water quality at a regional or watershed scale. They have long been recognized as important habitats for both rare and common plants and animals.

Understanding and demonstrating the contributions of isolated wetlands is critically important because of regulatory uncertainty regarding their protection and management. We have assembled a uniquely qualified team to understand the contribution of isolated wetlands in a working agricultural area. We have designed this study to describe and measure fundamental wetland processes leading to water storage, improved water quality, and management practices that may improve the environmental health of these systems.

Our project is also unique in that we are collaborating with agricultural producers at all stages of this work. We will document this engagement process through the development of educational materials that describe the process of discovery as the research team and landowners learn about isolated wetlands. We hope this material will serve as a roadmap for other research teams and landowners working to better manage agricultural land and water. 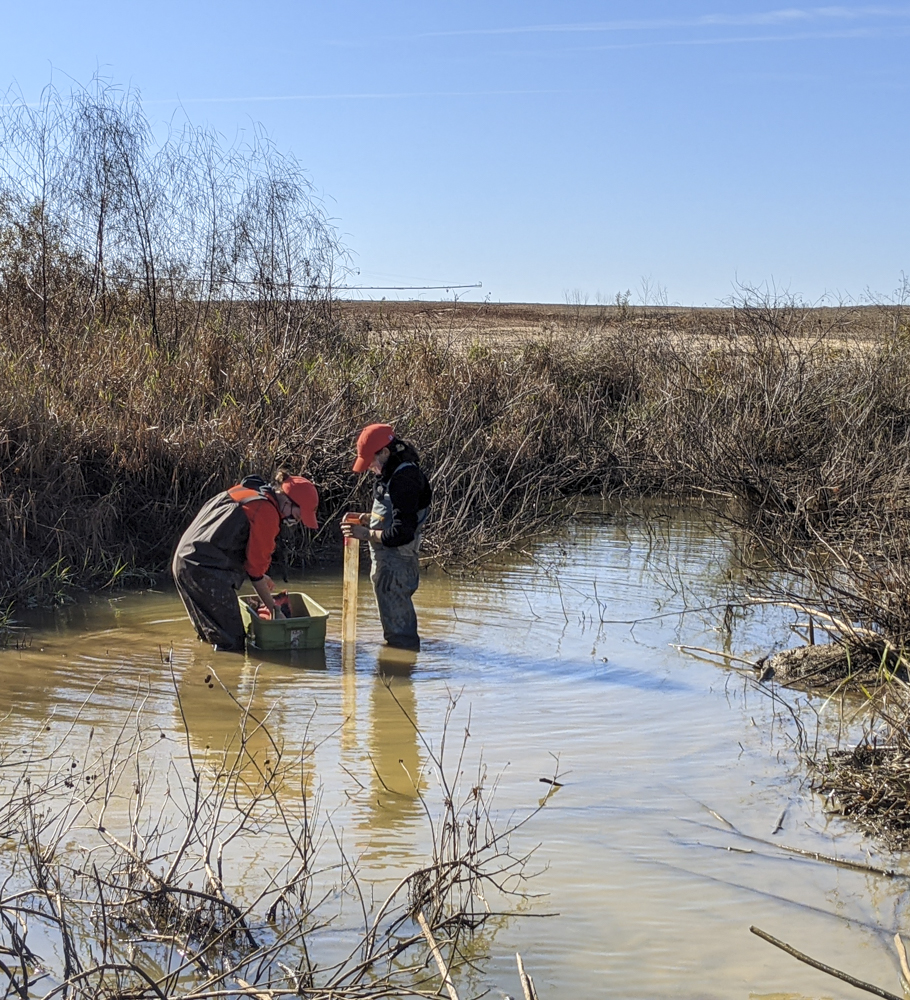 Jones Center scientists Drs. Jeffery Cannon, Steven Brantley, Steve Golladay, and Seth Younger (we welcome Seth, a new Post Doc who has joined us for this project!) are launching a new study funded by the Natural Resources Conservation Service aiming to inform restoration of longleaf pine at the scale of entire watersheds.

Longleaf pine ecosystems once covered much of the southeastern U.S. coastal plain from Texas to Virginia, but the vast majority of these ecosystems have now been converted to other types of forest, or lost to agriculture and development. Interest in restoration of longleaf ecosystems is increasing, with over 1.5 million acres of longleaf pine established over the last 20 years. However, loblolly pine still dominate the region’s managed forests, and a significant portion of the South’s forests go unmanaged. Beyond timber production, longleaf ecosystems provide other economic values such as high-quality habitat for Northern bobwhite quail and other wildlife, reducing evaporation to sustain streams during droughts, and providing improved hurricane resistance relative to other pine species.

Our overall goal is to develop decision support tools to help prioritize longleaf restoration efforts in the Southeast to maximize ecosystem benefits such as streamflow protection, thus enhancing the value of the investments that these efforts represent. We will begin with analysis of large watersheds using the Soil-Water Assessment Tool, a computer model combining weather, terrain, soil, and landcover data with field measurements of longleaf pine and streamflow. We will initially estimate how various restoration scenarios can impact streamflow in large representative watersheds across the region with the goal of scaling up to cover the entire natural range of longleaf pine. In later phases we will extend our work to other ecosystem benefits including water quality, wildlife habitat, and carbon storage. 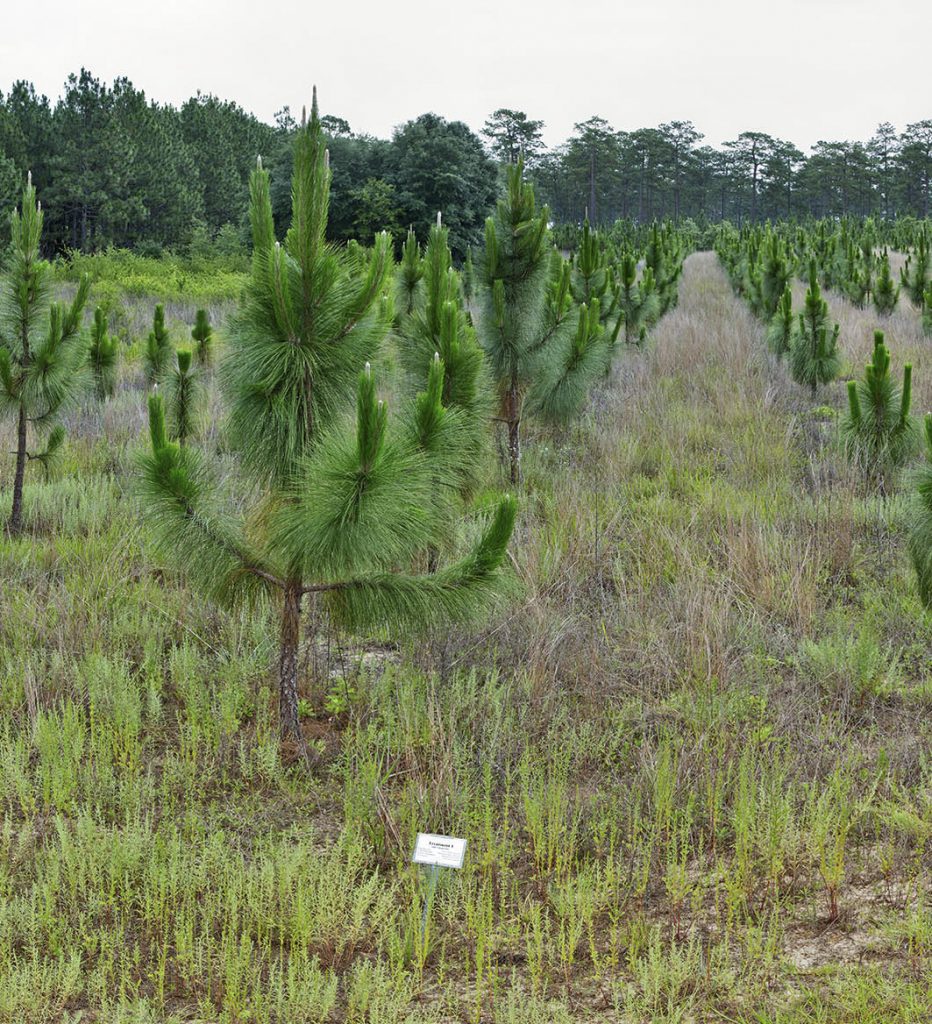 A commonly used approach to restoring slash or loblolly pine plantations to longleaf pine forests is to clear-cut the off-site species of pine, apply appropriate site preparation treatments, and plant with container-grown longleaf pine seedlings. An alternative approach that has generated increasing interest is a gradual conversion that retains some portion of the existing canopy of off-site pines for an extended period of time and establishes longleaf pine under the existing canopy in phases.

Preserving some of the existing canopy offers a temporary surrogate for the desired forest structure and function of mature open pine, allowing time for the development of the longleaf pine planted beneath that canopy. Although undesirable in the long term, until the longleaf pines establish and mature, the off-site pines contribute needle fall as fine fuels for prescribed fire, provide important habitat structure for wildlife, and suppress the release of hardwood stems that are present in the understory.

To mimic, as closely as possible, the natural demographic and spatial patterns for longleaf pine regeneration in multi-aged forests, Jones Center conservationists Scott Smith and Brandon Rutledge are using a gap-based approach for underplanting longleaf pine at Ichauway. Our initial attempt—likely the earliest documented implementation of a phased conversion—began in 1998 on a 250-acre, 60-year-old slash pine plantation, separated into three stands by state and county roads. Our original plan was to underplant small canopy gaps (0.25 acre) created by harvesting overstory trees on about 10% of the stand area, every 10 years. Our assumption was that, after 10 years of growth, the seedlings would be sufficiently tall to be visible and would therefore not be damaged by logging equipment during subsequent harvesting operations.  Unfortunately, a severe drought limited success of the initial planting and many of the gaps had to be replanted in 2003-2004.

This early implementation revealed several opportunities for improving this approach. First, although longleaf pine seedlings can survive and grow in relatively small openings under a canopy of longleaf pine, canopy gaps in slash and loblolly pine plantations need to be larger than 0.25 acre because the crowns of these species transmit less light to the forest floor. Second, herbicide treatments to control competing understory woody plants in the planting gaps would have improved the survival of longleaf pine seedlings. Finally, it became apparent that the number of entries required when only 10% of the stand was harvested at each entry would be operationally impractical over the long run, because modern logging equipment simply does not have room to maneuver as more and more small openings are planted. In 2013, additional gaps were created and a second phase of underplanting occurred.

After Hurricane Michael in 2018, new natural canopy gaps were created because of downed trees from the storm. These new gaps provide us with an opportunity to accelerate the conversion process by implementing another phase of underplanting. Our Conservation Fellows Miranda Wilkinson and Austin Hargrove surveyed the number of seedlings in the existing gaps. Their work enabled us to determine if any existing gaps need to be replanted, and to quantify the current number of trees per acre in each gap. They also completed a timber inventory of these stands to determine overstory stocking and identify new gaps, from both the hurricane as well as new gaps that would be created through harvest. Finally, our Conservation staff marked trees in preparation for the harvest, which occurred in early 2021.

We will now implement three distinct treatments in the three stands involved in this project. In the first stand, we will replant existing gaps that are understocked and new gaps that were created during the hurricane. For the second stand, we will create corridors to combine new and existing gaps to establish one contiguous longleaf pine planting area. Finally, in the third stand, we will combine several of the existing gaps located close together to create eight larger gaps. In total, we harvested about 17% of the trees within all three stands. Our next steps in the conversion process will include prescribed fire to reduce fuel loading, herbicide application to reduce woody competition, and planting longleaf seedlings next fall or winter. After the upcoming planting, longleaf coverage will increase from about 13 to 30 percent of the area in these stands. Advancing the long-term conversion of these stands from an even-aged slash-dominated structure to a more natural looking, multi-aged longleaf pine forest is an important goal within our Natural Resources Management Plan.

These projects will allow us to continue observation and monitoring of differences in the success of longleaf pine seedling establishment, allowing current and upcoming Ichauway Conservation Fellows an opportunity to participate in a long-term adaptive management project. We are excited about the next phase of this project and the opportunity to extract a silver lining out of the cloud of Hurricane Michael. 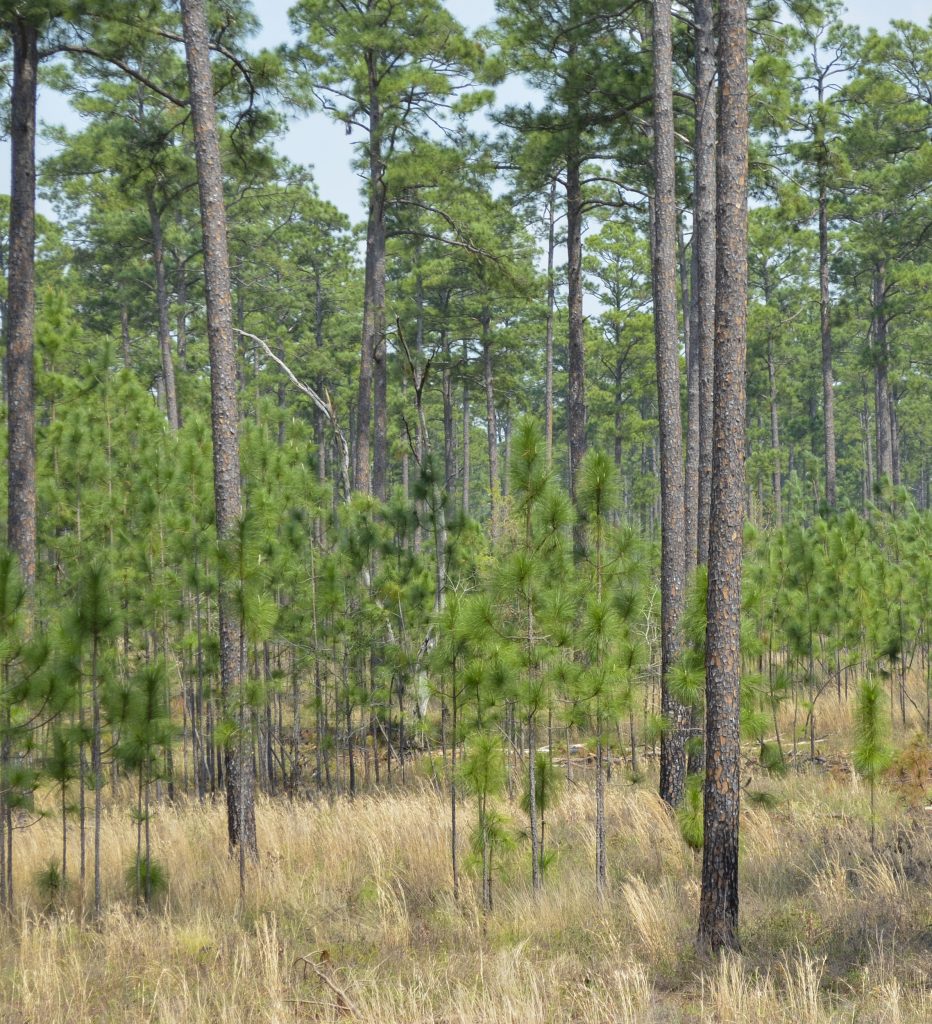 Although the Jones Center remains closed to visiting groups for events such as workshops and short courses due to COVID, we continue to find ways to engage in education and outreach efforts. Many of the conferences that we normally attend to share the latest information about our research have moved to virtual formats, allowing us to continue to use those important outlets. Here at the Center, we have also employed virtual meeting platforms to move forward with planned events.

Originally scheduled at Ichauway in late March of 2020, this workshop was postponed and ultimately recast in a digital format. Through virtual platforms, we successfully planned and convened an ambitious and unprecedented cooperative 2-day workshop to address wind events as forest disturbances. Jones Center Director and Entomologist Dr. Kier Klepzig, with collaborators Drs. Kamal Gandhi and Chris Peterson at the University of Georgia, organized this event, entitled “Catastrophic Wind Disturbances in the Anthropocene: Patterns, Processes, and Ecosystem Management – An Ichauway Workshop”. We virtually welcomed over 30 attendees (from diverse sectors, disciplines, and geographies), discussing trends in wind disturbance, including effects of wind on forest heterogeneity, plants, wildlife, insects, food webs, and other natural disturbances, wind disturbance mitigation and management, and future research needs. Products from this workshop will include knowledge syntheses, grant proposals, and interdisciplinary research projects. 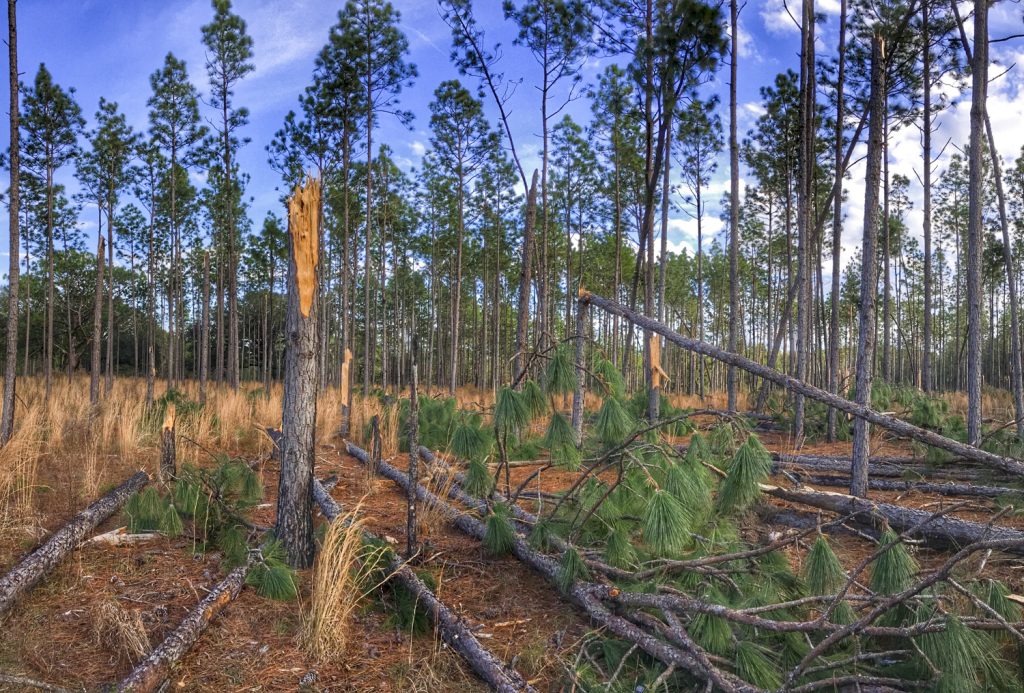 Several years ago, Dr. Lora Smith (Center herpetologist) and Jonathan Stober (former Center conservation biologist) developed a standard methodology for surveying gopher tortoise populations. Widely adopted across the Southeast, these survey protocols have improved our understanding of gopher tortoise distribution and population dynamics. Over the last few years, Dr. Smith and her Research Associate, Jen Howze, have conducted several training workshops that have been attended by biologists in the region working with gopher tortoises. Although COVID precluded having our usual onsite, field-based workshop this year, we were able to present an alternate virtual workshop. The virtual format streamlined the logistics and allowed more people to attend than we can usually accommodate for our in-person training. We also included a video demonstrating field survey methods. The workshop was attended by 14 people including staff from the U.S. Fish and Wildlife Service, Georgia Department of Natural Resources, South Carolina Department of Natural Resources, Department of Defense, Poarch Band of the Creek Indians, and a private consulting firm. 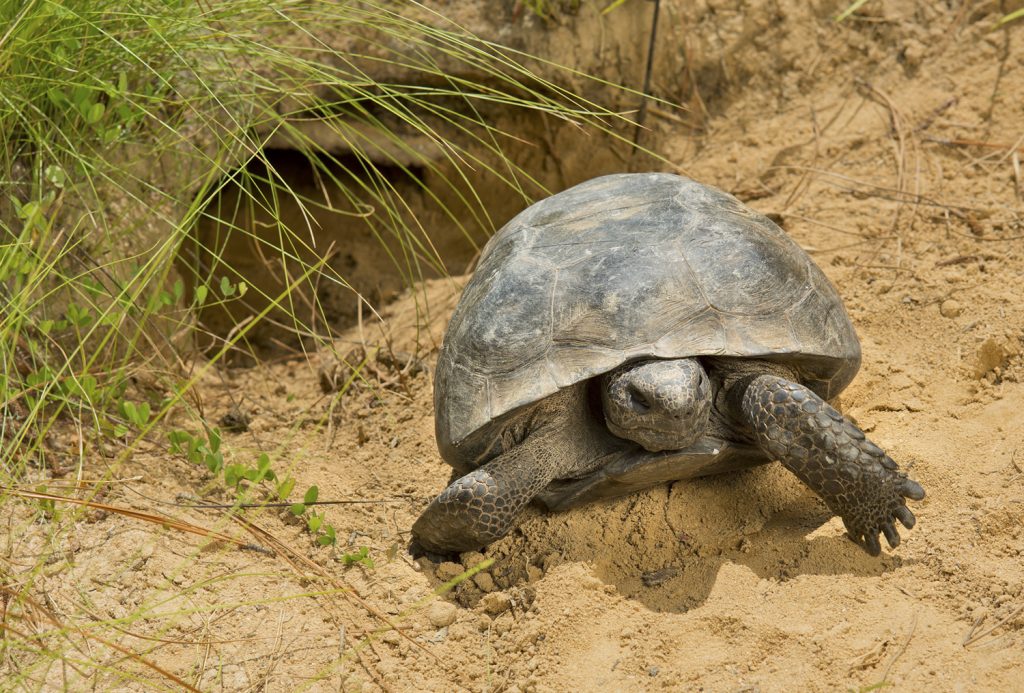 Over the last year, we have built a new Jones Center at Ichauway website to better reflect our programs and provide a more accessible, welcoming, engaging experience as website visitors navigate through all there is to know about the Center. Kudos to our Education Program Assistant, Jessica McCorvey, for her hard work and attention to detail in getting the site across the finish line.

We have added Instagram to our social media portfolio! This platform is especially suited to sharing the work we do within the incredible beauty of the Ichauway landscape. Follow us on Instagram!

The Center is engaged in the Keeping Forests partnership, an effort to conserve the incredible forest resources that we have in the southeastern U.S. Our Education Coordinator Kevin McIntyre recently hosted an episode of the Keeping Forests podcast series “How the River Flows”, in which he interviews Dr. Margaret Walls of Resources for the Future. The interview focuses on a recent synthesis paper Dr. Walls co-authored on payments for watershed services, in which forestland owners are compensated for maintaining forest conditions that sustain water quantity and quality for downstream users. You can listen to the podcast here.