What habitat resources do eastern rat snakes use in pine-dominated landscapes?

The eastern rat snake occurs throughout the eastern US and is thought to be strongly tied to hardwood forests. However, its presence in pine-dominated forests in the southeastern US suggests it has broader habitat requirements than previously noted.

We investigated regional patterns of habitat use and spatial ecology in eastern rat snakes using radio telemetry across three pine-dominated forests in Southern Georgia and Northern Florida. All three sites were managed with frequent prescribed fire, however, Ichauway also used mechanical treatments to reduce off-site oaks (live oak, water oak) and reintroduce fire to areas that were historically in longleaf pine. We found that rat snakes at Ichauway had home range sizes that were nearly 4 times larger than Tall Timbers and more than 2.5 times larger than Pebble Hill. Snakes at all 3 sites selected pine habitat and open edges but used individual large oak trees for above ground shelter and basking.

Past management that reduced oak trees preferred by rat snakes at Ichauway may explain the difference in home range sizes between sites. Snake trapping efforts, as part of another study, suggested overall eastern rat snake abundance is lower at Ichauway than at Tall Timbers and Pebble Hill. 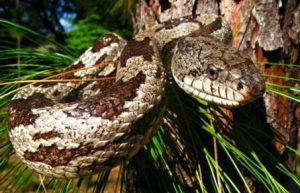